In order to auto-adjust cron expressions of EventBridge rules to summer-/wintertime, you have to use a lambda function. There is a github project which already solves this, but for my use case it was not sufficient. So I created my own implementation, which you can find on this github repository.

Originally I always worked with Terraform as an IaC tool. In my opinion, Terraform has some advantages over CloudFormation. Recently, however, I got into the situation of having to use CloudFormation in a customer project. In doing so, I ran into a problem. The aim was to define EventBridge rules that carry out certain actions at regular intervals (e.g. start Lambda functions). The problem: EventBridge rules can only be specified in UTC time format. However, UTC does not differentiate between winter and summer time. The cron expressions of these rules would have to be adjusted twice a year. This is ugly and a potential source of error. So I looked around for alternative solutions. I came across this project here, which sounded promising at first.

On closer inspection, however, a few problems became apparent:

Inspired by this project, I quickly solved the problem myself. The following approach solves the problems mentioned by using a lambda function, which ensures that the cron expressions are set correctly, taking into account the time zone as well as summer and winter time. Here´s how the workflow looks like:

This Lambda function runs twice a day. In addition, it is executed after each deployment in the target environment (qa or prod) in order to carry out an adjustment if necessary.

Imagine you want a rule to be executed at 18:45 german time - regardless if winter- or summertime. Since you have to specify the expression for EventBridge rules in UTC, there is a mismatch now: You want the rule to be triggered at 18:45, but for EventBridge you have to specify it for 17:45 (if wintertime applies). The lambda function can help here. Just specify the time you want the rule to be executed.

After rollout, you will see the following in your AWS account: 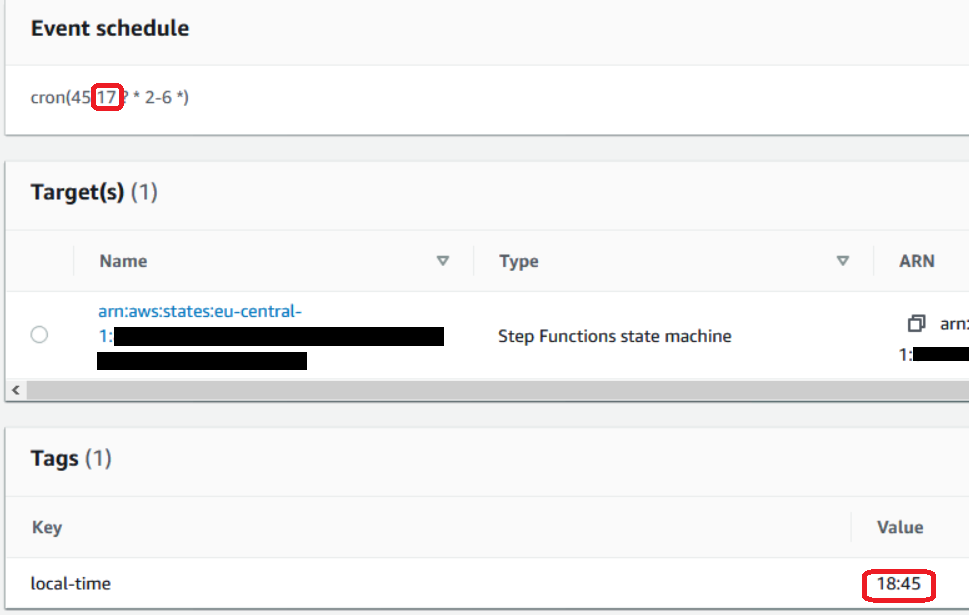 As you can see, the lambda function has automatically added a tag called local-time to the rule. Furthermore, it has adapted the cron expression in such a way that it executes a 18:45 german time now.

It is also possible to use more advanced cron expressions such as the following: 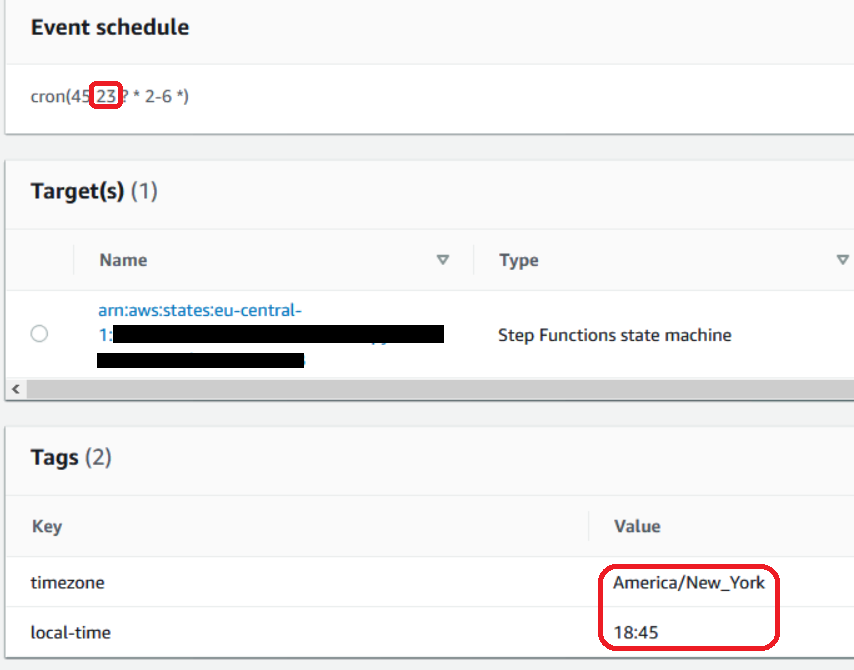 Caution: This tag won´t be removed during stack rollout as long as you do not do any changes to the rule which lead to a recreation of it. If a recreation is required, the tag gets lost!

The solution already helped us a lot in our project. However, it is not perfect, so there are some caveats here which are important to know:

The following formats of cron expressions are currently supported by the function:

This tag won´t be removed during deployment as long as you do not do any changes to the rule which lead to a recreation of it. If a recreation is required, the tag gets lost.