As part of a project that uses Terraform to build its infrastructure, I have dealt with the issue of providing Terraform modules via a private registry. Since I had no experience with this until now, I decided to implement a small PoC. Incidentally, Terraform Cloud wasn’t an option in this case, so I had to look elsewhere. I quickly realized that this topic is still in its infancy: There are very few private registries that support the Terraform API specification. After comparing Citizen and Anthology, I finally decided to give Citizen a try. With Citizen, I just had the feeling that it was a bit more mature than Anthology due to better documentation - although Citizen is far from mature either.

In the absence of a suitable test environment, I decided to set up the PoC locally using Docker.

First of all I needed a working Docker installation. Since I used Windows, I had a local Docker Desktop installation running under the hood on Ubuntu 20.04 (WSL). To simplify the whole thing, I also used Docker compose. However, this is not absolutely necessary.

A first run with docker run -d -p "3000:3000" ghcr.io/outsideris/citizen:latest and subsequent browser-call via localhot:3000 quickly showed me that the Docker image worked. So I started playing around with the environment variables and mounts. Transferred to a docker-compose.yaml file it looked like this:

What I did here was basically to persist the database as well as the published modules by mounting two folders into the docker container along with configuring the paths to store this data. I also provided some environment variables to control, where citizen stores its data and how it is persisted. Have a look at the citizen documentation to see the full list of possibilities.

Before I was able to publish a module, I needed to setup an SSL certificate so that I was able to reach citizen using HTTPS. Doing so locally required some more steps (inspired by this blog entry):

The above steps install mkcert which is required to create SSL certificates for local testing. The result is two files, the certificate along with a private key. I created this certificate for the domain citizen.local. In order to resolve this, I needed to edit my etc/hosts file accordingly.

Furthermore, I needed a proxy which was able to deliver content via SSL. To so so, I had to enhance the docker-compose.yaml mentioned earlier: 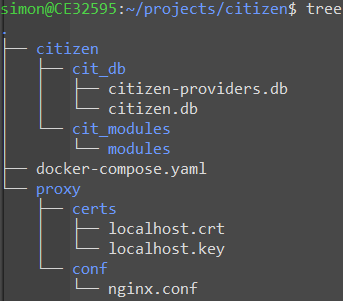 Now everything was in place and I was able to start the two containers with docker-compose up -d.

After setting up the prerequisites, I was able to move on to publish the module. When at the modules directory, thanks to docker using the cli utility of citizen was a one-liner:

Visiting the citizen UI again showed me that publishing the module was successful:

I was also able to see this by the files created: 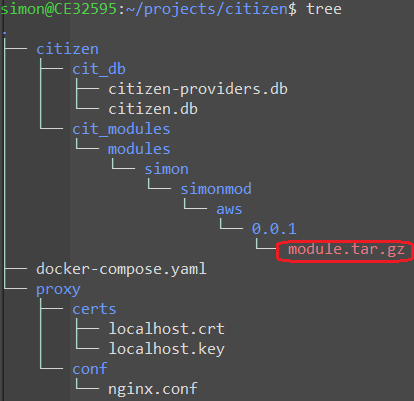 Including the module was an easy part, again. All I needed to do was to create a terraform file (e.g. main.tf) and include the module there:

After saving the file, running terraform init showed me that downloading and including the module worked as expected.